PROMPT: “Professor John Hickrotten-Faber is a famous chemist who has invented several CRISPR techniques. Write a 500 word biography about his influential work” 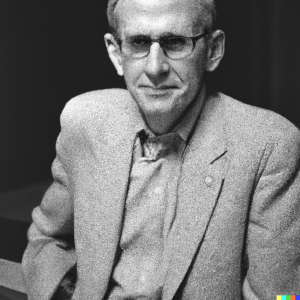 John Hickrotten-Faber is a renowned chemist and molecular biologist known for his pioneering work in the field of CRISPR gene editing. He received his undergraduate degree in chemistry from Cambridge University and went on to earn his Ph.D. in molecular biology from the University of California, Berkeley.

After completing his Ph.D., Hickrotten-Faber began working at the University of California, San Francisco, where he and his team discovered the CRISPR-Cas9 system, a powerful tool for editing genomes. This discovery revolutionized the field of genetic engineering by making it much simpler and more precise to make specific changes to the DNA of living organisms.

Hickrotten-Faber’s work on CRISPR-Cas9 led to the development of several new techniques for editing genomes, including base editing and prime editing. These methods greatly expanded the capabilities of CRISPR gene editing, making it possible to make more complex changes to DNA, including the correction of genetic diseases.

In addition to his work on CRISPR, Hickrotten-Faber is also known for his research on the regulation of gene expression, the process by which genes are turned on and off in a cell. He and his team discovered several key regulatory elements in the genome that control the expression of genes and are involved in the development of cancer.

Overall, John Hickrotten-Faber’s work on CRISPR and gene regulation has had a profound impact on the field of genetics and has paved the way for new treatments and therapies for a wide range of genetic diseases. His research continues to inspire new discoveries and advances in the field, and his contributions will undoubtedly have a lasting impact on the future of medicine and biotechnology.

UPDATE: We won! After being warned by the California Attorney General ICANN could be in danger of violating its constitution by letting the sale go through, ICANN denied permission for the sale.

If you don’t know the background to the PIR sale and why it’s a BIG THING, here are a few links to fill you in.

Four US senators sent a letter to the Internet Society raising a number of questions regarding the sale of the Public Interest Registry to Ethos Capital.  Their letter can be found here: https://www.wyden.senate.gov/news/press-releases/wyden-blumenthal-warren-and-eshoo-question-sale-of-org-domains-to-private-equity-firm

Other background can be seen here:

Sam Klein published an article that summarises well many of the unanswered questions and concerns that ISOC members have about the sale of PIR:http://blogs.harvard.edu/sj/2019/12/02/the-dot-org-fire-sale-sold-for-half-its-valuation/

It’s a PRIVATE vs PUBLIC debate regarding internet governance

I think there are two different perspectives in conflict over this issue.

Perspective 1: the PIR is a business with customers

Perspective 2: the PIR is a public body, like a public utility, with users, not customers.

I’ve spent much time in both Europe and the USA, and I think the two regions differ strongly over public services being provided by commercial companies.  This is best seen in their attitudes to public health.  Most Europeans regard the US provision of health care via profit-oriented businesses as almost insane, morally questionable (or even just plain evil) and blatantly inefficient; while most US citizens see nothing wrong with it, and either wonder how any government can possibly operate an effective health care system (because, in their view, only the profit motive makes for efficiency) or have a reflexive aversion to anything labelled “socialist.”

The role of the PIR as providing services for the non-profit sector further reinforces the perceptions of the “public service” people because non-profit is largely public service oriented.  For them, the PIR is not a business,  but a public body.  It’s like calling NASA a business.  For the public service perspective, this is a huge change.  So for these people, the appropriate model for evaluating the sale is the type of deal a government would do in awarding a contract for delivery of public services – generation of support from the stakeholders by explaining the case, consultation on solutions, public tenders with appropriate transparency, formal mechanisms for challenging the decision etc.

From my experience of US culture, there is much less value given to government provision of many services, and much more faith that commercial businesses will act ethically, than I see in Europe.

From the “public service perspective”, the primary responsibility of the PIR is to meet the needs of the user, and making profit is important only to the degree it helps meet those needs.  From this perspective, if it becomes profit-oriented, the PIR’s responsibility has to be that of deriving more value from registrants than it delivers, in order to pass that profit to shareholders.   We saw many arguments about this point.  The defence has been that the PIR will have to meet the registrant’s needs in order to make a profit.  However, the concern is that we have to trust it to do so, we can’t force it.  Many, especially in Europe, simply don’t trust any business that much – because it’s a business.  Furthermore, moving to a for-profit model introduces this potential conflict within PIR between service level and profitability.  Whether that conflict ever reaches the point of service decline is impossible to predict.  However, the risk doesn’t exist at all if the PIR is non-profit.  So the sale creates a new risk.  Many don’t think it’s acceptable for ISOC to create such risks.

Ethos has made public moves to address this concern with talk of B-Corp certification and the Stewardship Council.  However, they have not made specific binding commitments.  They have made statements, but there is nothing legally holding them to any course of action.  Furthermore, Andrew has specifically stated there are no undisclosed terms in contracts binding Ethos, and that what Ethos does once the sale is complete will no longer be an area of ISOC responsibility.  Ethos haven’t actually formally committed to going B-Corp, but it wouldn’t actually address the issue anyway because B-Corp or B-Cert doesn’t stop you profit-gouging, reducing services etc.  So B-anything won’t legally bind to the degree necessary to address the fears.  For many, the Stewardship Council has not adequately addressed this issue either.  Firstly, Ethos appoint the initial members of the council, who then appoint themselves forever.  There’s no transparency and no representation of the stakeholders.  Secondly, Ethos have not specified what formal control the council will have over PIR decisions.  As far as I understand from their webinar appearances, it will be largely advisory.  But they have specifically stated the Stewardship Council will not have veto over price increases.  So the only concrete commitment Ethos have made about the council is that it won’t have the power to prevent the thing they are offering it as a solution to.

From the public service perspective, this is also a significant change in the overall structure of the internet.  Domain names are the root of the whole tree.  Domain names are the gateway to presenting yourself to the internet.  The ability to add or remove an organisation from the web is a significant power in a global society.  The effects of how and what is done within domain registration have subtle but huge repercussions throughout the web.  From this perspective, there is a structural need for some part of domain name registration to operate in a non-commercial fashion.  The reasons why are too many for here, but can be summarised as “a healthy society is impossible if all services are provided by commercial organisations.”

If you have a distrust of commercial provision of public services, multi-level shell corporations, expansive NDA’s and hiding director identities, all look highly suspicious.  It might be business as usual, in business.  But in a public service, expectations are different and so these business activities are themselves proof that the deal is inappropriate.

As I see it, the only way the public service perspective could be satisfied would be if there were legally binding limits on what Ethos could do.  These would have to cover selling the PIR to another, probably something about who could be a shareholder, powers of the board, etc, and .org price changes.  These commitments would have to be far more than most businesses would agree to and Ethos have shown every sign of avoiding such commitments.

Those behind and supporting the sale, I suggest, do not see things this way.  For them the PIR is a business, making a profit is fine, it’s no big deal if every registration authority is a commercial enterprise.  For them, this is not a significant structural change in the internet.  I suggest this type of thinking is fairly common in the USA, but rare throughout most of Europe. I suggest one or the other perspective would dominate in most countries.

As a global organisation, I don’t think ISOC should pick a side between these two perspectives.  I think ISOC leadership needs to understand both perspectives, and I think it needs to give space to both.  People in ISOC governance need to recognise some members are ardent Marxists who would introduce a socialist state if they could, yet would be considered conservative amongst their even more Marxist community.  Other members would like to limit the role of profit-making companies to very limited sectors of the economy.  Other members think Marxism is as close to evil as a political ideology can be.  Some members would always trust the government to deliver a better service than any commercial company, while others assume every government enterprise must be blotted and inefficient.  ISOC has to accommodate all these extremes.  I do not see signs that it has done so.  My reading of the first emails on this issue is that ISOC leadership were surprised by the objections of the public service perspective, which indicates they had not realised this way of thinking existed within ISOC.  The arguments of about describing the PIR as a business, denying this was a significant change to overall internet governance, etc, suggest a way of thinking so deeply immersed in the commercial perspective that the public service perspective is almost incomprehensible.  I am not suggesting they should have agreed with it, merely they should have anticipated it, should understand it, and should be able to engage with it rather than simply asserting the opposite.  There’s no point having a global mission to connect everyone if we’re not going to use that as an opportunity to understand each other better.  And as a global organisation, ISOC needs to accommodate the widest range of perspectives possible.